Artistic Director Tim Fisher curates a line-up of great Australian artists for a series of intimate, moving concerts, all in the one venue. We look forward to welcoming back some Nanga favourites and to introducing our audience to some acts they may not have seen before. Aside from their musical virtuosity, our artists are big-hearted and generous with their time, and we are pleased to be able to support them.
If you are an artist with a query about performing at Nanga Music Festival in 2023, contact artists@nangamusic.org.au 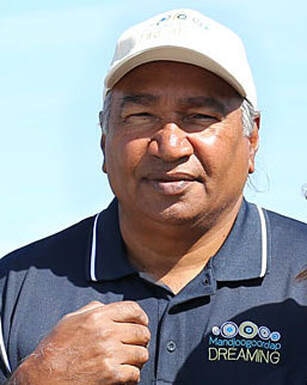 We are privileged to have George present the Welcome to Country for out festival again this year.

'When I was a child, I remember my family spending much time living in tents within bush settings and as children we made our fun from the bush materials. The bush was a place of learning bushcraft, hunting skills and finding foods. We lived in a number of places depending on where we had a work contract for the farming community to do fencing, hay carting or being a general farmhand. I remember the large tents, green in colour, several of them in the middle of bushland. This living with extended family in bush shelters was surviving at a time when we didn’t have a place where we could call our home, no purchased acreage with a house on. Our real home was the vastness of the territory we lived in and moved around on. It was and still is referred to as our kaaleepga or homeland. Where ever we made our fire and shelter on Bindjareb Boodja, we were in our territory and part of the Noongar Nation.'
mandurahdreaming.com.au/meet-george 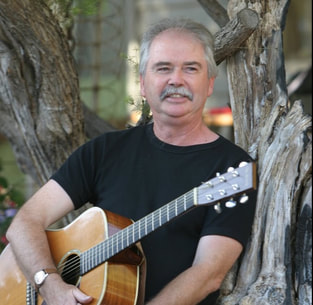 Bernard is one of the inaugural patrons of the Fairbridge Festival and a former Artist of the Year at the Port Fairy Folk Festival. ​Songwriter, storyteller, choir leader and Beatlemaniac, Bernard’s distinctive ragtime guitar style and songs of humour and emotional power have won him many fans. We are very grateful for Bernard’s ongoing support of the festival and for again leading our Nanga Songbook Singalong on Saturday evening.
​On Sunday evening Bernard will present a set of new and rarely heard gems from his back catalogue.
This year Bernard is celebrating 39 years working full time in the Australian entertainment industry. His longevity in the business confirms his great talent as a musician and wordsmith, his versatility and ability to relate well to different audiences with both humorous and serious repertoire. Bernard's shows focus on his original songs which are exceptional for the wit and smartness of the lyrics and the flawless guitar style that accompanies them.
bernardcarney.com

Albi and the Wolves 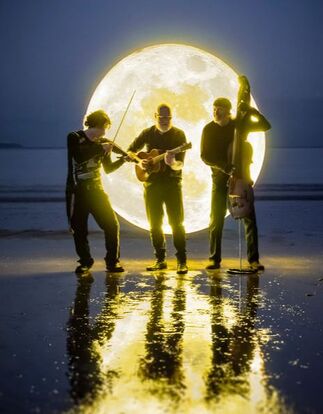 ​Albi & The Wolves are soul filled, energetic, electric, and beautiful and they pride themselves on pushing the limits of what three musicians can do within the string band format. The trio create a huge sound using only an acoustic guitar, an electric violin, a double bass, their three voices, and a stomp. These instruments are played by Chris Dent (the proud albino front man Albi), Pascal Roggen, and Micheal Young respectively and each member contributes to the music from broadly different musical backgrounds.
The band is renowned for their great stage presence and the huge dynamic within their shows that they have evolved by touring New Zealand extensively. Their songs stand out on their own too as the band recently won the Best Folk Artist 2018 TUI at the New Zealand Music Awards for their debut album One Eye Open. So whether it’s Woodford Folk Festival in Brisbane, Australia, or a humble homestead in rural New Zealand the band bring their world class sense of humour and their music with them. Wherever you get the chance to see them you most definitely should as this act is not to be missed.
Chris Dent (Lead Vocals, Acoustic Guitar, Stomp)
Pascal Roggen (Electric Violin, Backing Vocals)
Micheal Young (Double Bass, Backing Vocals)
www.facebook.com/AlbiAndTheWolves/
www.albiandthewolves.com/
open.spotify.com/artist/2KCoOshA6m2HhX6CHsqlUu
www.instagram.com/albiandthewolves/
www.youtube.com/channel/UCOsSpGrX-DzEV5rm2WxBF4w 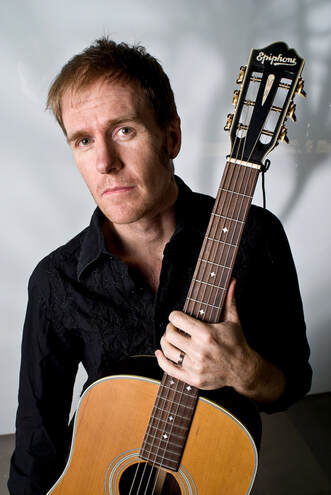 ​Fred will be playing songs from his rich back catalogue and his latest album 'Domestic’ described in the press as   “a stunning cycle of deeply personal songs about marriage, babies, love, tolerance, decency and the complexity of modern life…a sublime study in tenderness and vulnerability”. He’ll also be presenting a remarkable song cycle on Afghanistan drawing on new material he wrote after working on the evacuation of Kabul in August 2021.
"Fred Smith is simply the best folk/country musician working in this country…beyond writing some of the finest songs about Australians at war, he has created a repertoire that is wry, literate, witty, powerfully emotional and insightful.” (Bruce Elder, SMH).​
​www.fredsmith.com.au 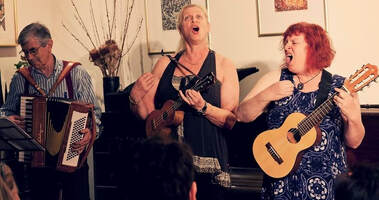 ​Nikki and Mel Jones are Jones of ARK, bringing a sense of the absurd to the serious business of light entertainment with their deep understanding of the shallow human condition. Exploiting soaring vocal harmonies, ukulele, guitarlele, and various silly small things, Jones of ARK invite you to join them on the journey/safari/expedition/ drunken-stagger into music, miscellany and mayhem.
​Jones of ARK are ably supported by Dave Hoffman and Jim Elliot, who speak fluent accordion and bass respectively. 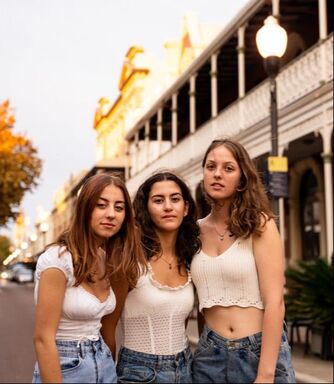 ​Rising stars of the Perth music scene, The Stamps, deliver delicious harmonies similar to those of Boygenius or The Staves. After their first public performance at Nannup 2020 while on school tour, the girls fell in love with performing live. Scarlett, Rubina and Sofia joined harmonic forces, bonding over similar music tastes and songwriting, and thus The Stamps were born.
​They have been showcased as Triple J Unearthed High feature artists and have notched up an mpressive resume of performances around Perth.
Facebook www.facebook.com/thestampsofficial
Instagram @thestampsofficial 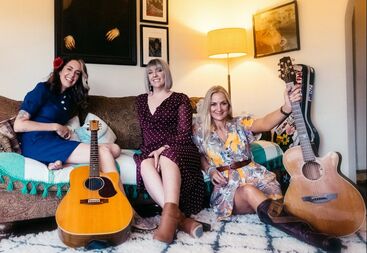 ​Hailing from Perth, this naturally captivating alt-folk femme trio have a gift for harmony Scenstr describes as ‘staggering and utterly empowering’.
The Holy Smoke brings together three sensational, seasoned female voices paired with two acoustic guitars, a keyboard and a whole lot of soul. Combining musical backgrounds of country, folk, soul and gospel, Rose Parker, Karlee Rae and Delilah Walsh will take you up the river on an alt-folk journey and beyond.
Paddle not included. 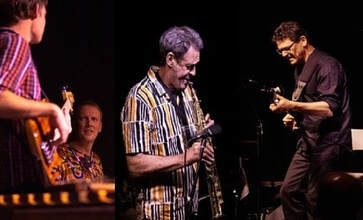 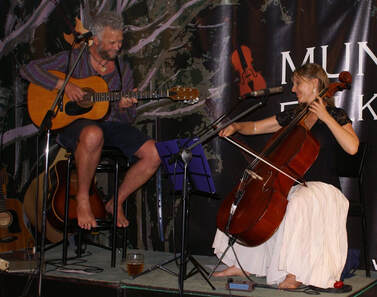 Nick and Jen have been weaving cello, guitar and voice harmonies together on and off for more than 25 years. They’ve performed at The National Folk Festival, Fairbridge, Nannup and Nanga Festivals singing beautifully crafted songs of the ocean and the joys and trials of love, life, parenthood and drinking rum. Jen has recently moved back from South Australia, rekindling their musical chemistry and creativity.
Tingley Turner will be bringing you a swag of fresh new material laced with songs from their previous CDs. 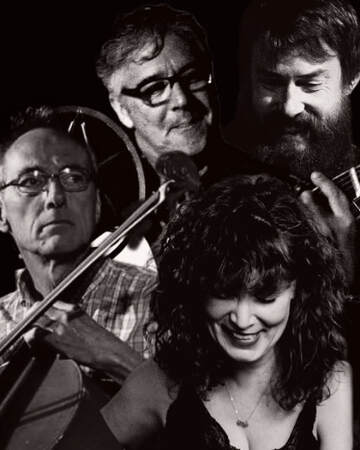 Fiona Rea and Friends are the joyous product of a natural gravitation of like- minded musicians who fuse richly layered instrumentation with song. Textural and refined, the quartet relish in an eclectic world of folk offerings that cross multiple genres and stylings. They are driven by a respect and honesty for "in the moment" expression that keeps the music fresh and vital.
The quartet comprises Fiona Rea (vocals), Rod Vervest (guitar), Peter Grayling (cello) and Phil Waldron (double bass).​ 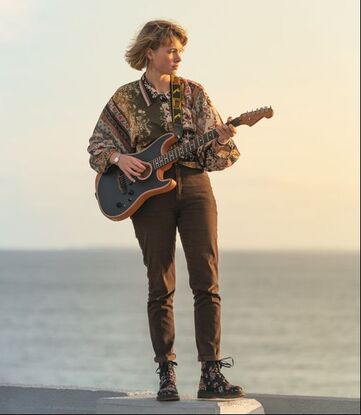 Romy B is a regular performer at intimate Perth venues. She is a singer/songwriter with a unique artistry and atmospheric vocals, accompanying herself with bass or guitar & live loops. Romy B won the Fairbridge Songwriting Comp at age 14, and Breakthrough Music Comp at 18, workshopping with John Butler, Mama Kin, Andrew Winton and members of Eskimo Joe. Romy was a Nanga Youth Scholarship winner in 2018.
Romy B has released her own music and continues to score goals and take opportunities to further her career in the music scene.
An engaging, innovative and approachable performer, we are delighted to welcome Romy B back to Nanga. We always knew she was one to watch! 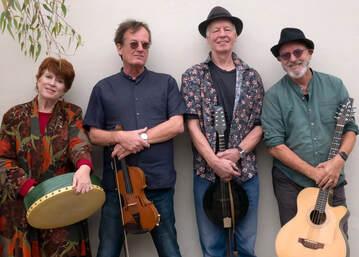 Stravaig: ‘to wander about aimlessly’. Far from aimlessly, Stravaig give you songs and tunes from Celtic and Americana traditions and beyond. Stravaig are Ros and Steve Barnes, Alan Malcolm and Andrew Heard. Festival goers will be familiar with Ros’s exquisite voice and Steve’s accomplished guitar; here they combine forces with Alan and Andrew’s impressive fiddle and mandolin chops to bring you energetic tunes and subtle harmonies. 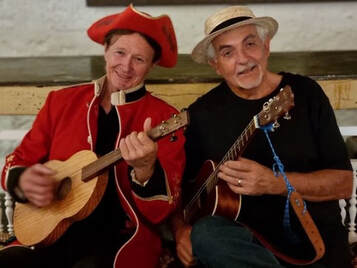 Folk duo Tim Darby and Donald Wilson win hearts and engage minds wherever they perform with their mix of quirky humour, open hearted intimacy, vocal harmonies and eclectic musical style. Their easy banter and authentic stage presence reach out to invite the audience to join them in their musical meanderings. They play (in order of size but not necessarily importance) Ubass, guitar, ukulele, a smattering of banjo and....if the occasion calls for it....garden shears. ​ 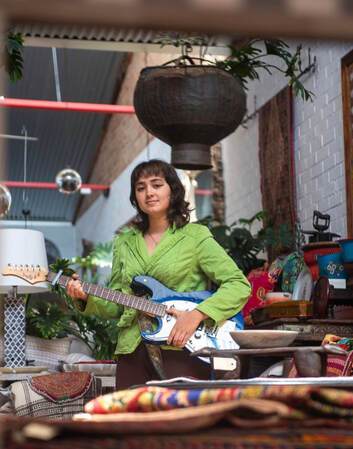 From raw, captivating melodies tied with a brand of refreshingly powerful honesty to high energetic and dynamic performances; it’s no wonder, Siena Rebelo has placed herself as one of the most exciting up-and-coming artists in WA.
​Her unique yet dynamic sound combines the richest parts of soul, indie and folk influences all in one, driving a spectacular  performance each time leaving audiences star struck …. Rebelo is one not to miss!
“Nanga last year was such an incredible experience to work on my song craft alongside amazing musicians! Very honoured to be able to return and showcase some new songs!” 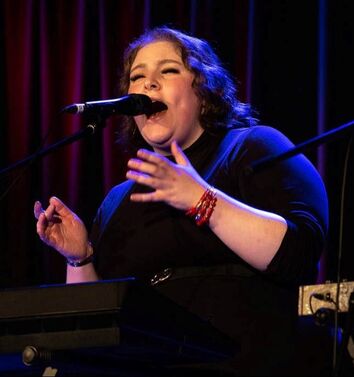 Hailing from Denmark, Western Australia, Rosie Williamson is a budding young performer with a fondness for soul, blues, and R’n’B. Rosie blends elements of these genres with dynamic lyrics, exploring her own personal experiences and raw emotions through song.
In the year since performing in the 2021 Nanga Youth Showcase, Rosie has worked nonstop on developing her sound, performing solo at the Denmark Festival of Voice 2022, winning second place in the Kojonup Talent Gala and recording an album of original tunes with her funk/soul band MoonBass.
Rosie is thrilled to return to Nanga to share how her musical journey has progressed, and to debut some new original songs including one dedicated to her hometown called Rainbow Coast. 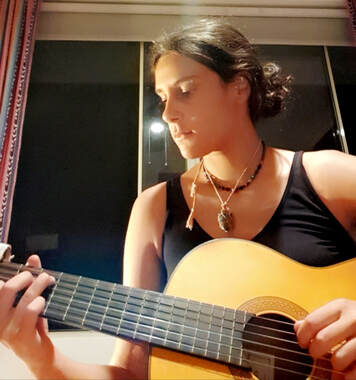 Singer songwriter Imogen Pinelli (19) believes producing and performing music is the single most integral deed to her soul’s purpose. She has participated in school-based specialist music programmes and performed a handful of gigs with her friends. It was only last year that she began writing her own material realising she could combine her love of poetry with her desire to portray emotion through sound.

“I am so grateful and excited to merge forces with this beautiful music community. I hope through this experience I can build relationships with and gain wisdom from others who share the bug for musical passion. I am prepared to be inspired, challenged and to contribute to the evolution of our united musical hive-mind.” ​ 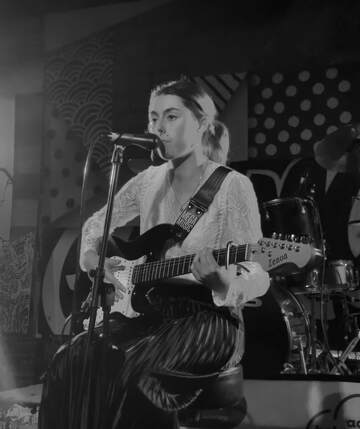 Based in Fremantle, Sophie Lilah (16) is an emerging indie folk artist with earthy, sweet vocals and a distinctive writing style which illustrate her life experiences. An endearing and engaging sound for all to enjoy.

“I tell stories and evoke certain emotions and moods through the songs I write. I have performed mainly just at school but have played a few gigs out and about this year, so I am really looking forward to the opportunity to grow my performing experience and learn from a mentor. I have heard great things about Nanga and am stoked to be on board - there is nothing I love more in this world than music!” 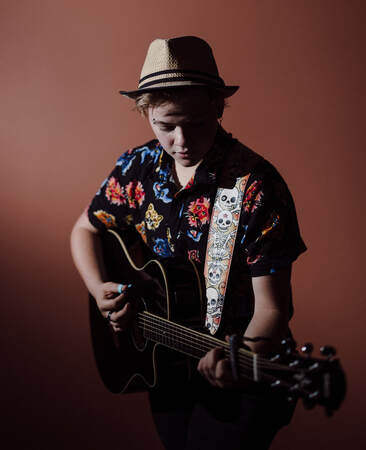 Timothy Veracruz (17) earnt recognition at Gozzy Rock youth music competition. Taking out second place, he went home with praise for his resemblance to a young Jeff Buckley and has since made several guest appearances on local radio stations, Heritage Radio and IPL Radio. His folk ballads of manic panic and sorrowful joy inspires and draws in audiences across Perth.

“But don’t be fooled! While the city lights have an allure of their own, my music has rung most true around the fire, planting seeds and singing about raw humanity while speculating the shades of the world.”